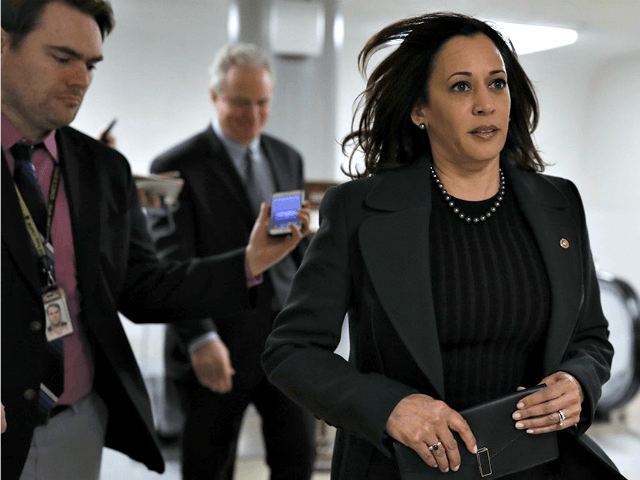 Sen. Kamala Harris (D-CA) is reportedly planning to HEAD to Iowa at the end of the October and will spend time in the first-in-the-nation caucus state during the final weekend before the 2018 midterm elections.

According to a report in The Atlantic, the 2020 presidential contender “has been reaching out to Democrats in Iowa” about the planned trip.

By planning to visit Iowa just weeks before the 2020 election cycle kicks off, Harris, according to the outlet, is crossing “a symbolic but unmistakably significant line toward owning her interest in a presidential campaign.”

Harris said that Kavanaugh had told the Judiciary Committee that he had written his “partisan” speech and his testimony was not some spontaneous outburst.

“He’s a partisan,” Harris said. “Let’s believe him at his word.”

Harris said Kavanaugh has not proven that he can demonstrate “impartiality, integrity, and truthfulness” and said the FBI investigation was not a “search for the truth” but “about politics and raw power to push through an unfit nominee.”

Harris added that she was “deeply disturbed that the Senate is moving forward” with Kavanaugh’s nomination and called the process a “travesty” that did not do Christine Blasey Ford or the American people justice.

“Every American is entitled to the benefit of the doubt,” Harris said in concluding her remarks. “But nobody is entitled to a seat on the United States Supreme Court.”

During the Kavanaugh’s confirmation hearings, Harris was the first Democrat on the Judiciary Committee to interrupt Chairman Chuck Grasssley (R-IA) during his opening statement on the first day of the hearing. Democrats spent most of that morning interrupting Grassley and trying to turn the hearing into a circus.

She aggressively questioned Kavanaugh, accusing him of using “dog-whistles” with words like “abortion on-demand” and “racial spoils system.”

But even her home-state papers had to concede that Harris’s grandstanding on the issue “failed miserably” and ended in the “most anticlimactic way.”

Harris was also condemned for posting a “sliced-and-diced” video of Kavanaugh’s testimony that made it appear like Kavanaugh was saying that he believed contraceptives are “abortion-inducing drugs.”

Though Harris’s official answer when asked about her 2020 ambitions has been that she is “not ruling out” a presidential, left-wing activists have been urging her to take on Trump after praising her grilling of Kavanaugh. In recent months, some overseas bookmakers have made Harris the favorite to win her party’s nomination in 2020.

“That’s great, until someone comes up with 6 Minute Abs.”

“What kind of dog is Puffy?”

“How’d you get the Beans above the Frank?”