RELEASE THE MEMO!: Democrats Refuse to View the 4-Page Memo That Will Lead to the Firing of the Officials at the Highest Level of the DOJ and FBI: Schiff and Pelosi BEG Zuckerberg and Dorsey to “Combat Russian Bots”

Here’s the apologist rag Newsweek who recently explained how Hillary Clinton could STILL become the president now explaining how #ReleaseTheMemo could be a Russian Conspiracy:

RUSSIAN BOTS MIGHT BE BEHIND CONTROVERSIAL #RELEASETHEMEMO CAMPAIGN, DEMOCRATS SAY

Top congressional Democrats have asked Facebook and Twitter to investigate whether Russian bots and trolls helped spur an online campaign to release a controversial classified memo that some Republicans say shows bias in the FBI’s Trump-Russian probe.

The hashtag “#ReleaseTheMemo” exploded on Twitter last Thursday, according to the Alliance for Securing Democracy, a bipartisan national security group tracking 600 Twitter accounts linked to Russian influence operations. Senator Dianne Feinstein and Representative Adam Schiff, both of California and both top Democrats in Congressional committees probing Russian interference in the 2016 election, on Tuesday called on the social media giants to investigate.

“If these reports are accurate, we are witnessing an ongoing attack by the Russian government through Kremlin-linked social media actors directly acting to intervene and influence our democratic process,” they said in a letter to Twitter CEO Jack Dorsey and Facebook CEO Mark Zuckerberg. 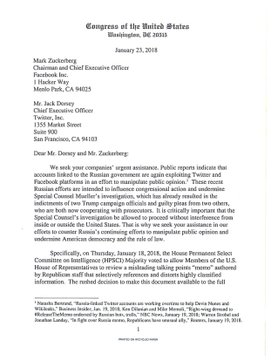 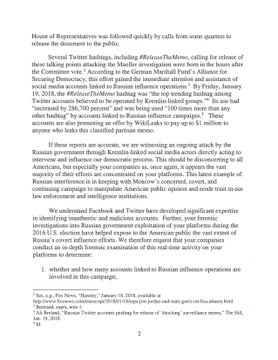 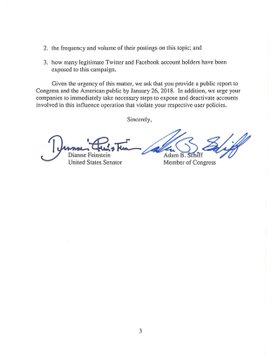 NEW: Sen. Feinstein, Rep. Schiff urge Facebook and Twitter to investigate involvement of Russian bots in pushing “Release the Memo” campaign: “If these reports are accurate, we are witnessing an ongoing attack by the Russian government through Kremlin-linked social media actors.”

“Public reports indicate that accounts linked to the Russian government are again exploiting Twitter and Facebook platforms in an effort to manipulate public opinion,” the letter said.

Republican staffers drafted the memo in question, according to Feinstein and Schiff. Details are limited as it remains classified, but the Washington Post reported the memo alleges the FBI and Justice Department used information from another notorious document—the dossier alleging collusion between President Donald Trump and the Kremlin—to surveil Trump campaign adviser Carter page in 2016.

The dossier was authored by a former British spy and veteran Russian investigator Christopher Steele during the 2016 race. It contains salacious but unverified allegations of Trump working with the Russian governments for years before his White House bid. Some lawmakers who have reviewed the memo say it attempts to discredit Steele’s dossier and alleges the investigator lied to the FBI, according the Post.

The #ReleaseTheMemo campaign began after the House Intelligence Committee voted to allow House members to review the memo. By Friday, it was the top trending hashtag among Russian-linked twitter accounts the Alliance for Securing Democracy tracks, according to The Hill.

Trump has not publicly called for the memo to be released, but Representative Mo Brooks (R-Ala.) told the Post he suspects the president will support declassifying the document.

“I think it’s fair to infer with about a 99 percent probability that since it helps the president so much, that he would be happy if the public knows about it.”

News of the FISA memo spread like wildfire on social media. Trump supporters pushed a #ReleaseTheMemo campaign after GOP Reps came forward demanding the document be released to the American public.

NEW: Sen. Feinstein, Rep. Schiff urge Facebook and Twitter to investigate involvement of Russian bots in pushing “Release the Memo” campaign: “If these reports are accurate, we are witnessing an ongoing attack by the Russian government through Kremlin-linked social media actors.”

It turns out Rep. Adam Schiff’s office was inundated with phone calls from citizens confirming they are not Russian bots.

The Gateway Pundit also contacted Rep. Schiff’s Burbank, California office Tuesday evening and left them a voicemail confirming we are not Russian bots and that we are demanding the FISA memo be released.

One Twitter user said Adam Schiff’s office is now hanging up on citizens calling to say they were not Russian bots.

Adam Schiff’s office is now hanging up on citizens calling to say they are not Russian Bots.

Just called and left a message

NEW: Sen. Feinstein, Rep. Schiff urge Facebook and Twitter to investigate involvement of Russian bots in pushing “Release the Memo” campaign: “If these reports are accurate, we are witnessing an ongoing attack by the Russian government through Kremlin-linked social media actors.” pic.twitter.com/SkAci5NefK

I’ve called everyday and got an side to answer. they ask for your name and zip code but tell them the memo is an American issue not just a Burbank issue.

A very rude young man in AS office just hung up on me. After he talked over me and wouldn’t even let me finish a sentence.

Autumn Peddie@peddie_autumn
Replying to @B75434425

Adam Schiff’s office is now hanging up on citizens calling to say they are not Russian Bots.

My husband just got through to Schiff’s office. Told them “Censorship is Communism! That he was an American Citizen and didnt eat Borst and drink Vodka!
We the People Want the Memo! Schiff is a Mental case and should resign! ” #ReleaseTheMemo

After Democratic lawmakers insulted half of America by declaring that the #ReleaseTheMemo hashtag was just Russian bots — a new #NotABot hashtag went viral calling for the release of a memo that is alleged to outline surveillance abuses against the Trump campaign. 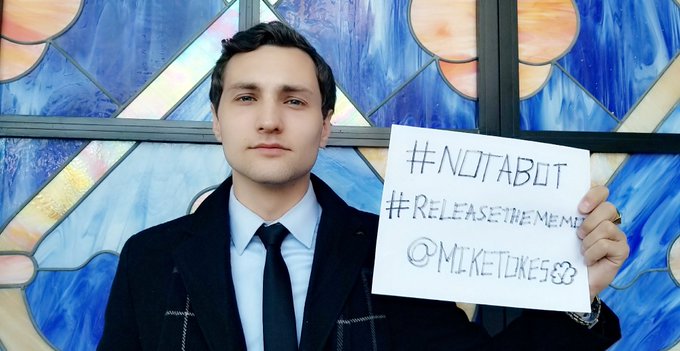 Do I look like a “Russian Bot” to you?

No, I’m a concerned American who wants to know just how corrupt and unconstitutional our government became under the Obama Administration. #NotABot #ReleaseTheMemo

On Thursday evening, Twitter users began using #NotABot to tweet photos of themselves holding signs with the #ReleaseTheMemo hashtag.

Users who participated in the campaign were instructed to tag Senator Dianne Feinstein (D-CA) and Rep. Adam Schiff (D-CA).

We are officially announcing the #NotABot campaign.

Make sure to tag @SenFeinstein and @RepAdamSchiff

We will PERSEVERE! #MAGA @realDonaldTrump

Hey @RepAdamSchiff and @SenFeinstein I just wanted to share this with you. You’ve been calling millions just like me “Russian Bots”.

I am no Russian Bot, but I sure do care about a transparency. Which you obviously oppose unless it’s your talking pts.#NotABot #releasethememo pic.twitter.com/64hovVYbQQ

Dismissing the will of the people only strengthens our resolve to find the truth behind the corruption you’re hiding. 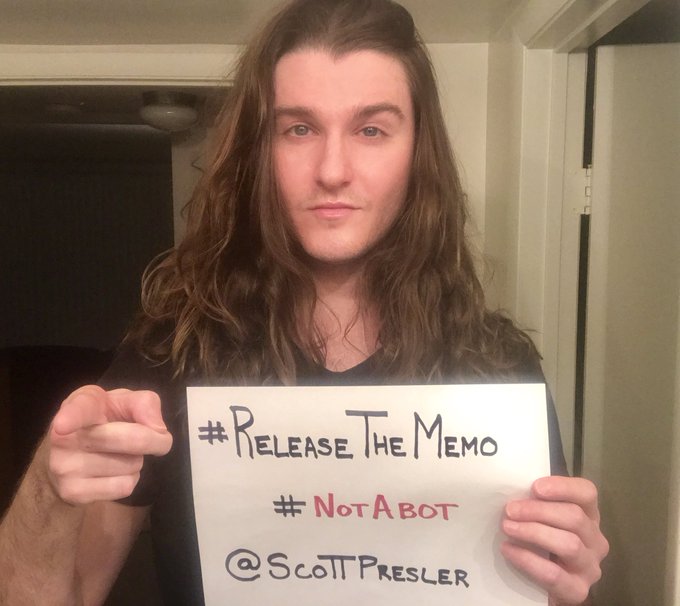 Your Russian bot conspiracy theories won’t distract us from the 50,000 Strzok and Page texts or the bombshell memo. 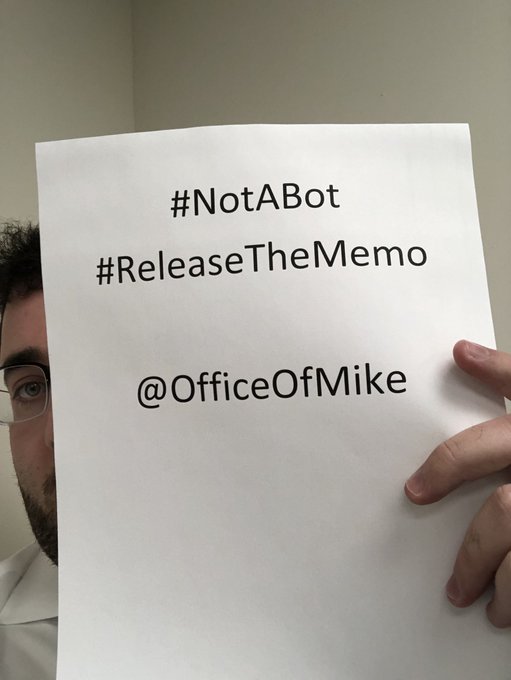 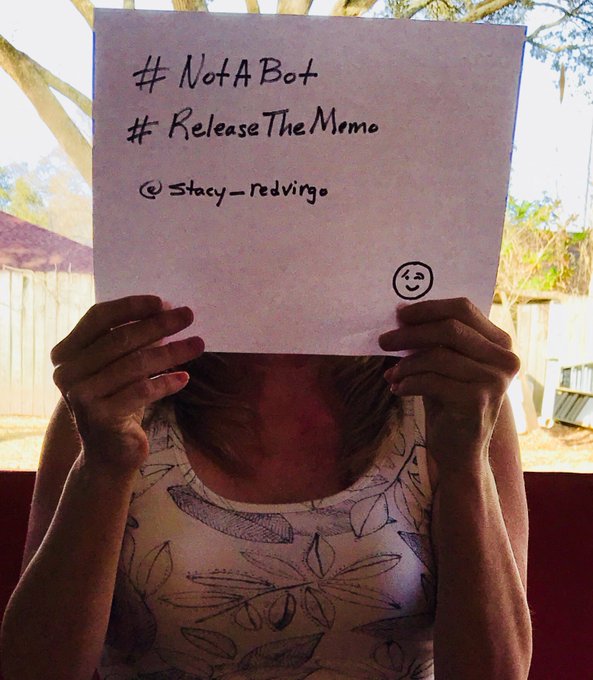 Hey @AdamSchiffCA and @SenFeinstein
I am #NotABot so shut your pie hole about this ridiculous Russian Bots narrative.

. It’s going to happen so let’s get it over with.

The memo in question was drafted by Chairman Devin Nunes (R-Calif.) about alleged FISA abuses at the Department of Justice. It is said to implicate FBI Deputy Director Andrew McCabe, Deputy Attorney General Rod Rosenstein, and former FBI Director James Comey and is based on classified material that was provided to the intelligence committee, which Nunes chairs.