This Tweet on April 12, 2015 is from “Mountain West” to “@redsteeze” and “@Reince”, who is Reince Preibus, over a year before he would become President Trump’s White House Chief of Staff.

Things that make you go hmmm.

It would be good to know the relationship between the players linked in the Tweet to have some context. Is this sarcasm, is this in jest, is this even a trolling of Reince Preibus by @Mountain West, who just links in @redsteeze in a random Tweet? Real journalists are gonna have to figure this all out, it’s beyond blogging paygrade. 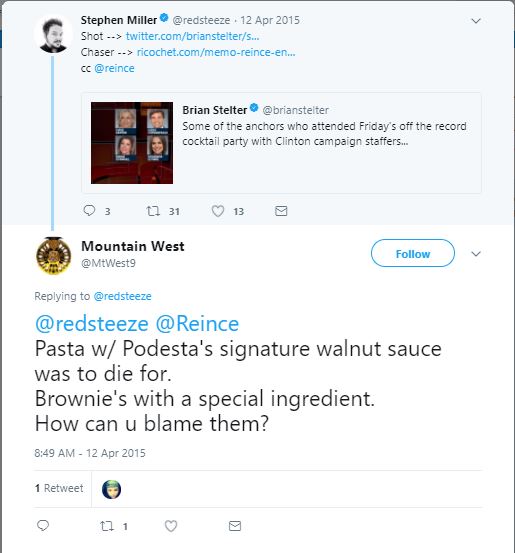 was to die for.

Brownie’s with a special ingredient.

How can u blame them? (end quote)

The top link of the Tweet that Mountain West was replying to, “SHOT” https://t.co/ilFId7IOKG, leads to:

Some of the anchors who attended Friday's off the record cocktail party with Clinton campaign staffers… pic.twitter.com/yybUuhpyvg

The second link “CHASER” leads to

Which “ricochets” to an article by Stephen Miller, or @redsteeze the other recipient of the Tweet that came from Mountain West.

There are 29 Comments in the article which are probably worth perusing.

During a 2012 Republican primary debate, George Stephanopoulos asked Mitt Romney an obviously slanted if not altogether planted question about banning birth control. This mystified Romney since he had never even considered the issue as part of his platform. No major Republican had. But Stephanopoulos raised the issue and because of it, the GOP was forced to fight a two-year-long, imaginary “war on women.”

This talking point was later used by David Gregory on “Meet the Press” against Todd Akin whom handled it less articulately than Romney. But the fault in that did not lie with Stephanopoulos; it rested solely at the feet of the RNC for approving a former Clinton White House operative and still loyal Clinton acolyte to moderate a GOP debate.

Whomever was in charge and agreed to that decision should be exiled to somewhere very far and very cold where only Sarah Palin can see them from her house.

The GOP cannot control who NBC, ABC and CBS put into executive news editorial positions or the stories they choose to report, or not report.

However, they can choose if they participate any longer with conglomerates whose clear goal is to protect an unpopular President and elevate a future Presidential candidate in Hillary Clinton.

It is time to stop complaining about media bias and do something about it. Something bold.

ABC and NBC have instituted a three-week blackout — on network broadcasts, websites and social media pages — of the devastating admissions of MIT economist Jonathan Gruber. The ACA architect repeatedly boasted of deceiving the American public about legislation that cost six million people their family doctor.

This should be the final straw in any relationship the GOP and RNC leadership has with these networks, period. No more debates, no more appearances on “Meet The Press,” “Morning Joe,” or “This Week” on ABC.

Boycott both NBC and ABC over failing to report on Gruber’s revelations and put CBS on final notice over the revelations that they coordinated with the Obama administration to tank Sharyl Attkisson’s Benghazi reporting.

Network news is a dying religion becoming more ideologically rigid, forgoing any attempt to stay relevant in a media landscape that no longer needs them. Leave them behind. We’ve already shown that it works.

Marginalize them and label them progressive news outlets and make them live by it. MSNBC came out of the progressive closet fully earlier this year and their ratings and web traffic got worse. Air America is no more and Current TV is now an unloved stepchild Al Gore gave away for oil money.

Reince Priebus threatened to boycott NBC and CNN over Hillary movies and documentaries aimed at paving the way toward her eventual coronation in 2016.

It was a bold and refreshing action that loudly stated enough was enough. Both networks pulled their Hillary projects.

On the web, name reporters from both networks have chosen a blackout or ridicule approach. NBC News’ crack team of political reporters led by Mark Murray and Chuck Todd have covered their eyes and ears. ABC political director Rick Klein can’t be bothered either. However, John Harwood took a more direct approach:

.@JohnJHarwood@JohnEkdahl Thought: We’re too quick to act via biases to declare stories scandals and flapdoodles before reporting them out.

I listened to/get what Gruber said, & get why it makes people mad about ACA madder. but that is only significance @ron_fournier@JohnEkdahl

Six million healthcare plans lost on an admitted and oft-repeated lie, and this isn’t news to them. Enough is enough.

They have chosen, like most scandals involving the Obama Administration, to report on the Republican reaction and “overreach” instead of on the story of itself.

Gruber, to whom the administration deferred on dozens of occasions to speak for them, admitted the only way ACA could be passed was to lie to stupid American voters.

American voters have figured out the lie, as demonstrated by the results of the 2014 midterm elections. But the only group left defending the Obamacare catastrophe is the media by now ignoring Gruber.

This isn’t bias. This is malfeasance and corruption.

The media went all-in for Obama to be President, so their credibility is directly tied to his. NBC and ABC ignore the Gruber story not because it makes Barack Obama look bad but because they were his dutiful messengers.

NBC hides behind a peacock-shaped shield, trying to convince everyone they’re still the network of “Friends” and “Cheers.” “NBC Sunday Night Football” falls behind “The Walking Dead” and it’s not because of Peyton Manning’s seemingly week-to-week record-breaking performances. The condescension emanating from Bob Costas’ sermons on racism and gun control is chasing away viewers.

What’s becoming evident, especially with a younger and deeper Republican bench going into 2016, is that network news will depend on the RNC much much more than the RNC will need them. It’s time for them to start acting like it. Priebus, et al., hold all the cards here.

Network media no longer drives the news cycle. “Meet the Press’” ratings are back to dead last after putting in a new quarterback. More people have their heads buried in their fantasy football teams on Sunday mornings than are listening to Stephanopoulos or Donna Brazile.

They have become a relic using Jon Stewart and Stephen Colbert as iron lungs to stay alive.

The party leadership needs to make inroads on college campuses. This audience doesn’t take a study break to watch Brian Williams or Matt Lauer. Viral media has taken over and every effort on network news relevance has failed.

YouTube, Netflix, Hulu, Facebook and Twitter are all far more viable options for primary debates and even a presidential debate, with wider and younger audiences. No one is asking for Sean Hannity or Mark Levin to host primary or presidential debates, but networks have clearly demonstrated they are not interested in balance. (Candy Crowley, anyone?) The conservative argument in media is to have a level playing field. Network media knows they can’t do that because on a level playing field of ideas, conservatives win.

This is not the same network media that broke the Kennedy assassination or the moon landing. It isn’t.

Let NBC and ABC cater to Grandma Hillary and the gaggle of Democrat senior citizens vying for the nomination. No one wants to hear Chuck Todd have to repeat questions because none of the candidates can hear him.

But it’s time RNC leadership realizes that if network news outlets only want to shield their omnipotent President and crack Sarah Palin jokes five years after the fact, they can do it without our help. 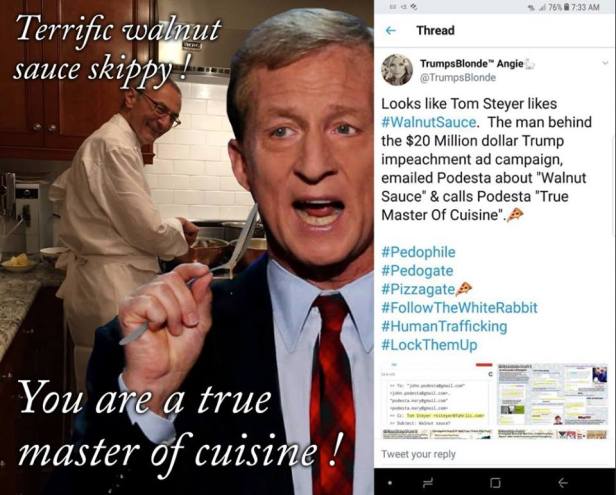 NEW YORK — Hillary Clinton’s campaign team held an off-the-record dinner Thursday night in Washington, D.C., for roughly two dozen journalists and staff members at John Podesta’s house, according to sources familiar with the matter.The dinner signals that the Clinton team is trying to engage with top reporters in the days before the Democrat’s expected announcement of a 2016 presidential run. It also suggests the new campaign team is looking to change course from the toxic relationship with the press that plagued the 2008 race. The Clinton team is also holding a private event in New York on Friday night for journalists, according to sources.

Podesta, the campaign chairman and a seasoned cook, made a pasta with walnut sauce for the dinner guests…

Podesta, the campaign chairman and a seasoned cook, made a pasta with walnut sauce for the dinner guests, which included reporters from The New York Times, The Washington Post, Politico, The Wall Street Journal, The Associated Press, Bloomberg, McClatchy, Reuters and several major TV networks.

A Huffington Post reporter attended the dinner, but did not discuss it with this reporter.

The guests also enjoyed a shrimp appetizer, homemade cookies, and a selection of wine and beer — including, appropriately, Brooklyn Lager.

A Clinton spokesman declined to comment on the gathering.

Clinton has long had a fraught relationship with the media, going back to scandals and controversies during her husband’s presidency in the 1990s. But in recent months, Clinton sources have promised that the 2016 campaign would be different.

She took questions from the press for about 15 minutes last month following revelationsthat she exclusively used a private email account for government business throughout her four years as secretary of state, but hasn’t since given an interview.

During a journalism awards ceremony late last month, Clinton suggested she wanted a fresh start with the Fourth Estate.

“I am all about new beginnings,” Clinton said. “A new grandchild, a new email account. Why not a new relationship with the press?

So here it goes. No more secrecy. No more zone of privacy.

But first of all, before I go any further. If you look under your chairs, you’ll find a simple nondisclosure agreement.” 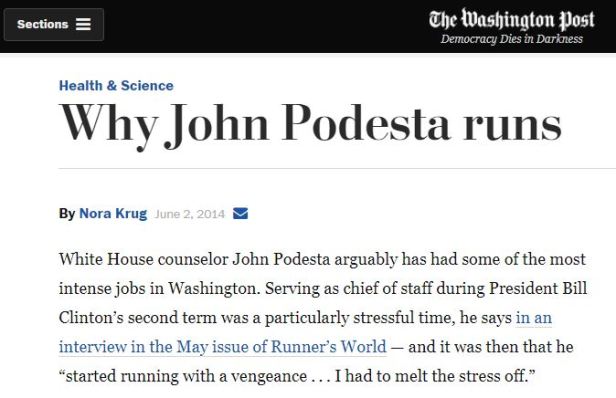 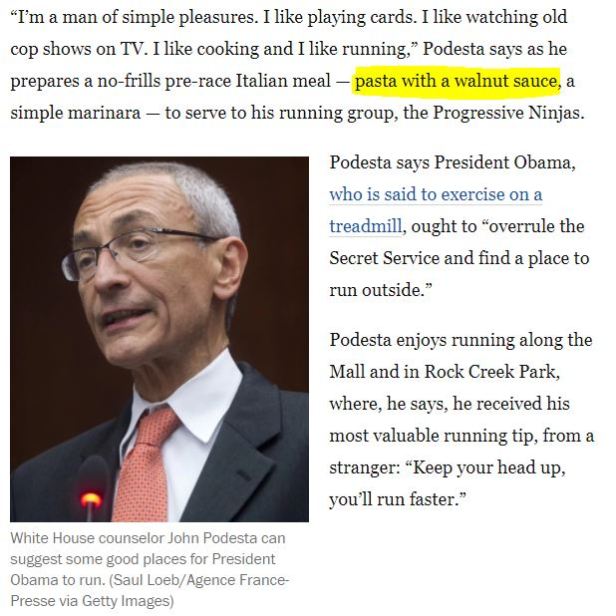 This is breaking January 9th, the Tweet will probably be down soon, so here’s the JPG for posterity’s sake. Here’s the link to the Twitter Archive for posterior-ity covering. 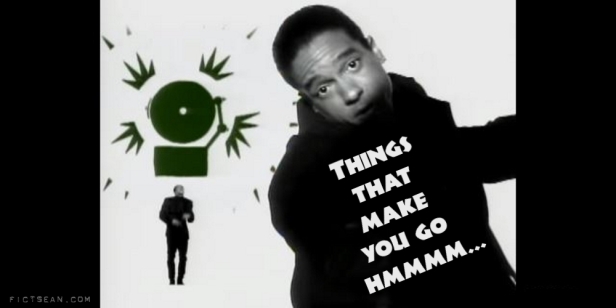 I’ll post that meme below, but THAT all was inspired by John Podesta taunting Julian Assange about being penned in the Ecuadorian Embassy while Podesta was mowing down on Lobster Risotto with his “SIGNATURE WALNUT SAUCE.”

3. I bet the lobster risotto is better than the food at the Ecuadorian Embassy. https://t.co/zyViu1R4UL—
John Podesta (@johnpodesta) October 14, 2016

Yes, we get it. The elite eat better than the peasants they abuse.

Below is NOT an actual Twitter exchange between John Podesta and Julian Assange, but it IS what inspired the Twitter search to come up with the Screen Cap that is an IRL MEME that is better than the joke! (Still, the joke meme IS funny, if you grok the context.) 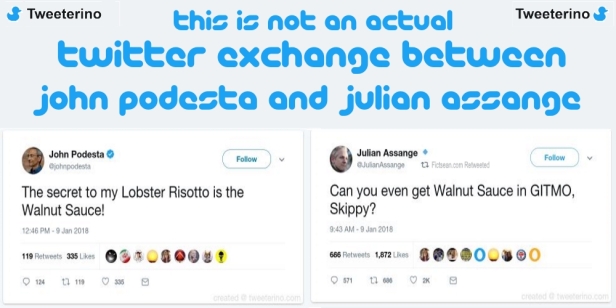 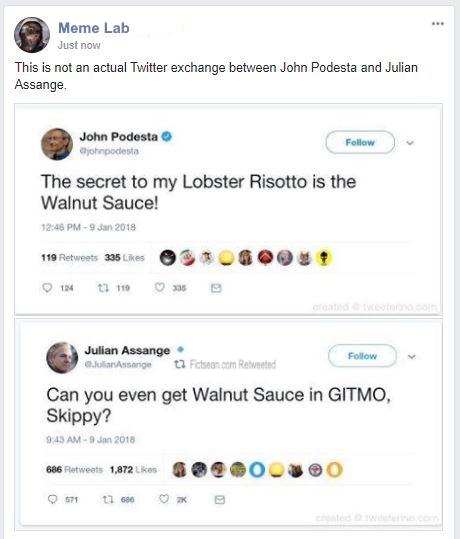 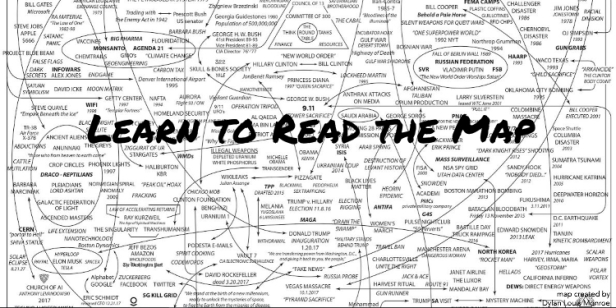 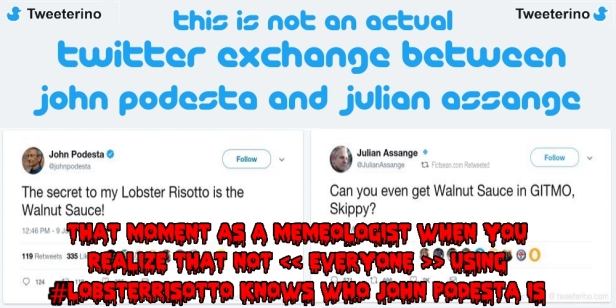 2 thoughts on “2015 TWEET TO RNC Chariman / Future WH Chief of Staff REINCE PREIBUS: “Pasta w/ PODESTA’S signature WALNUT SAUCE was to die for. BROWNIE’S with a SPECIAL INGREDIENT. How can u blame them?””