The images of the fires, particularly in Ventura, are devastating and heartbreaking. Much like the footage Americans viewed with the recent historic flooding in Houston, many people are becoming victims of nature in mere moments and losing everything they have ever known.Below are scenes that provide a snapshot of the hell and lake of fire sweeping across southern California. 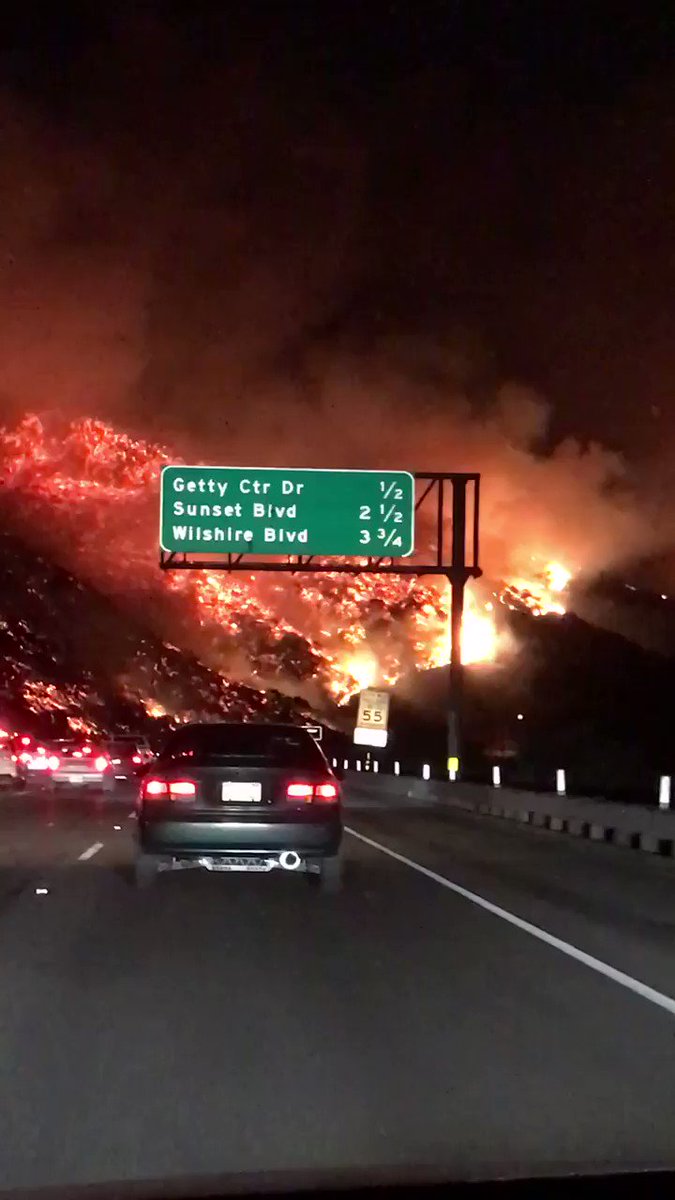 Not the typical morning commute… 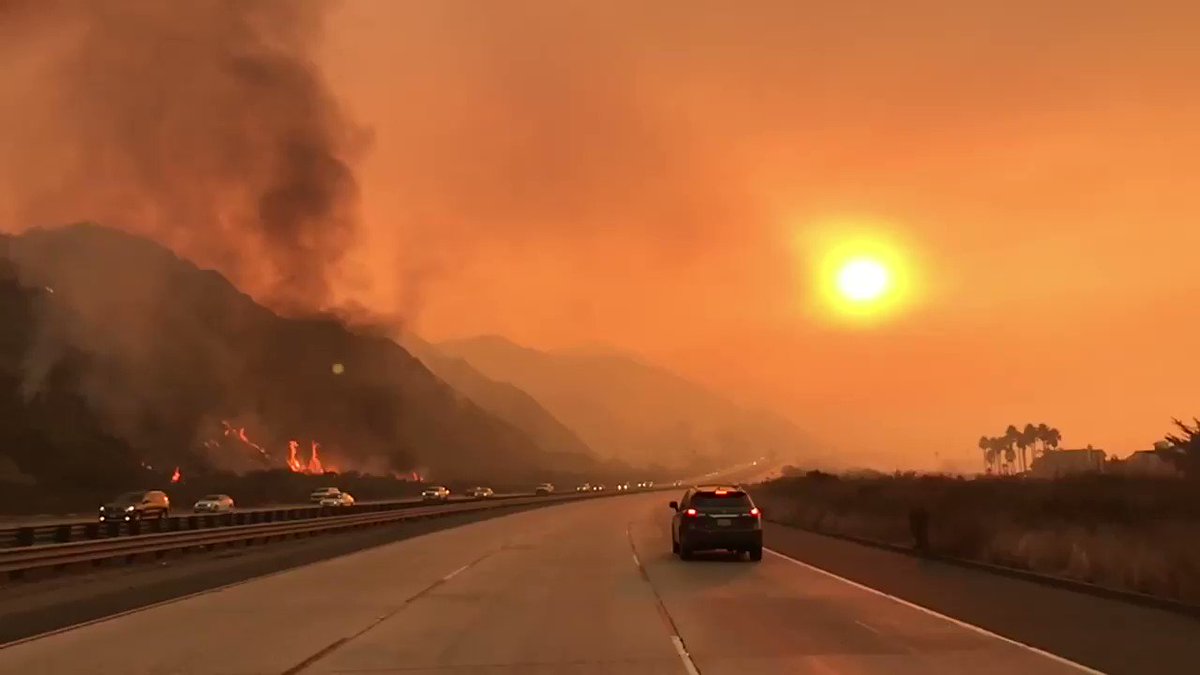 Beautiful & dangerous. Our drive along US 101 as we make our way from the #Venturafire to a 5th fire now burning near the Getty. #CaliforniaWildfires 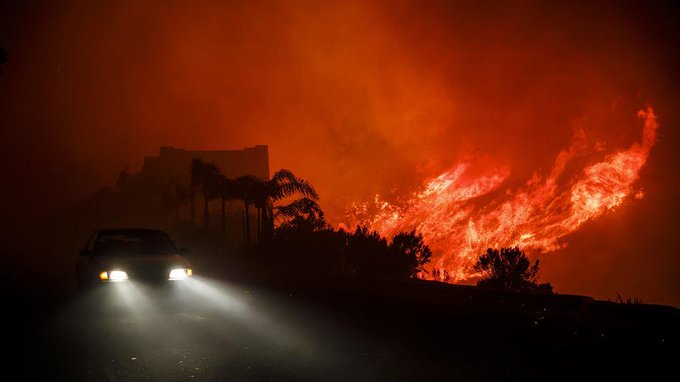 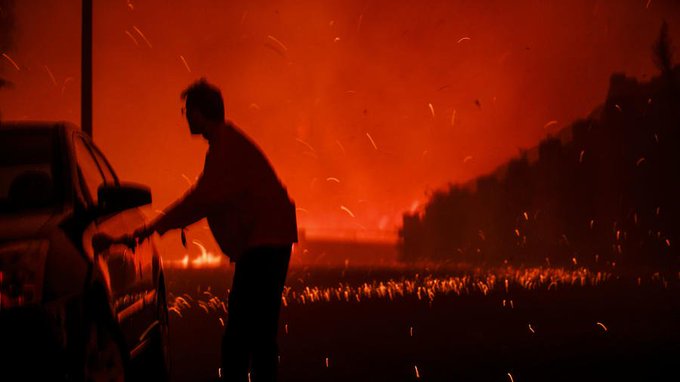 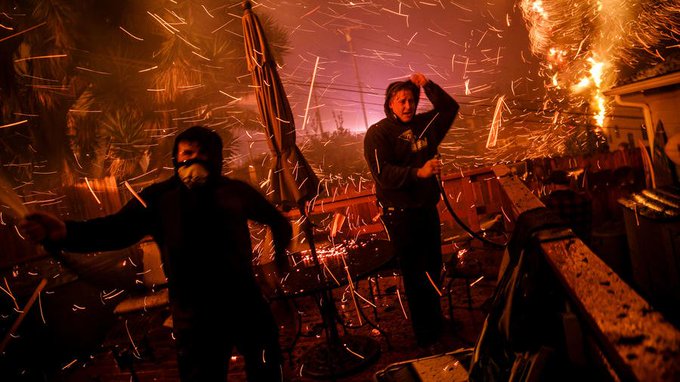 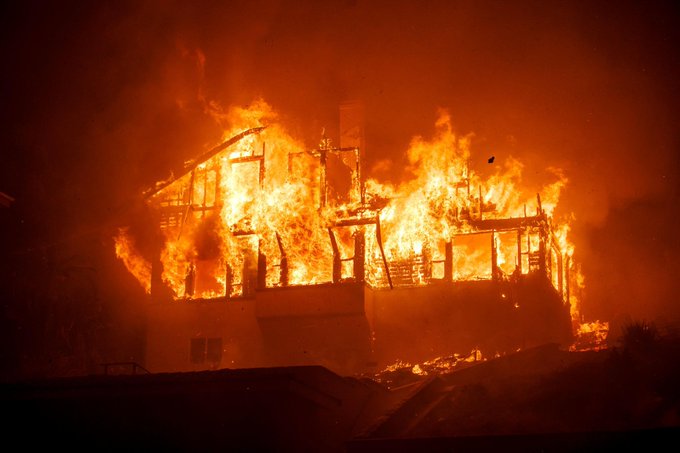 The intensity of the #ThomasFire, plus the wind, made it pretty much unstoppable, fire officials said. “The prospects for containment are not good” http://lat.ms/2AwvjKQ 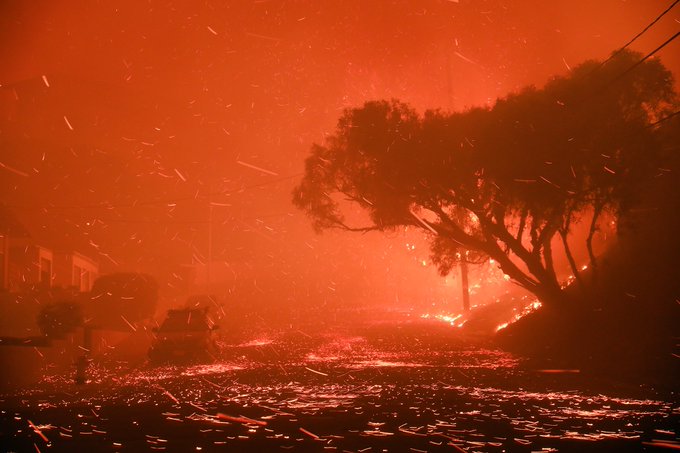 The fire is moving very quickly with the wind. #ThomasFire 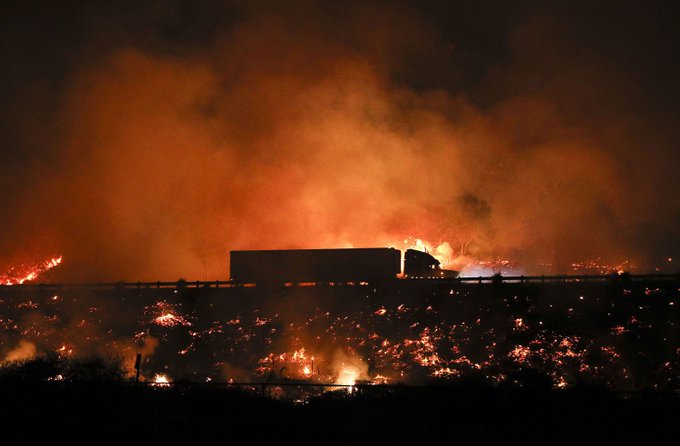 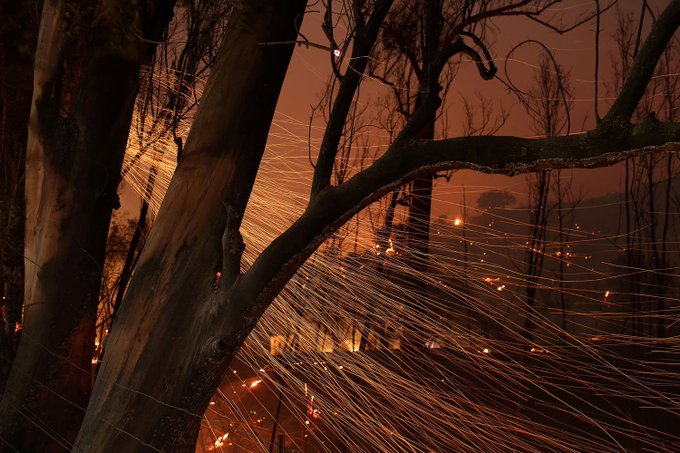 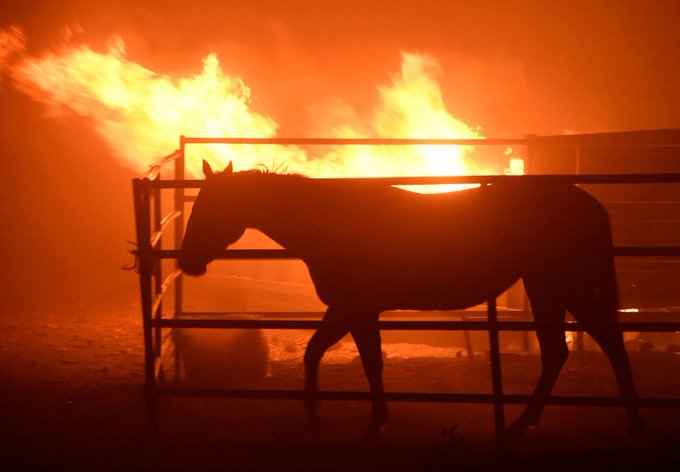 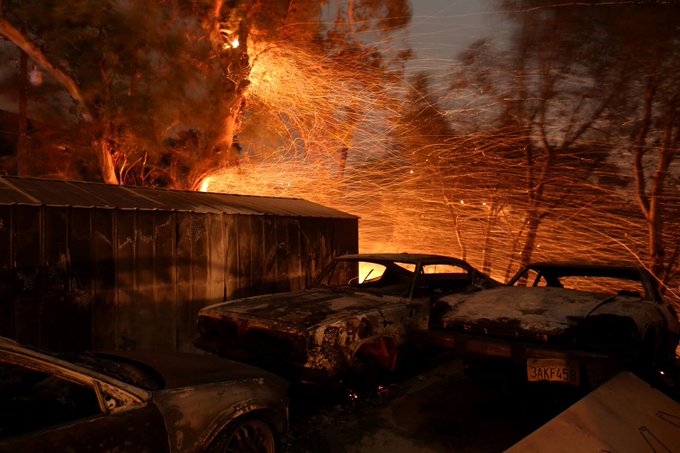 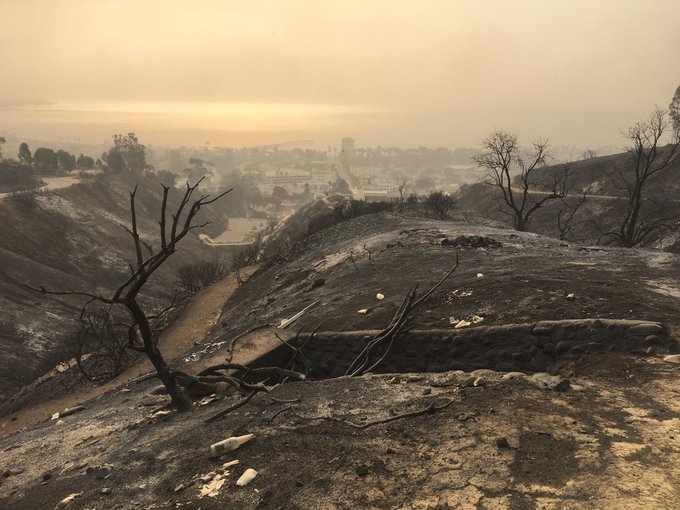 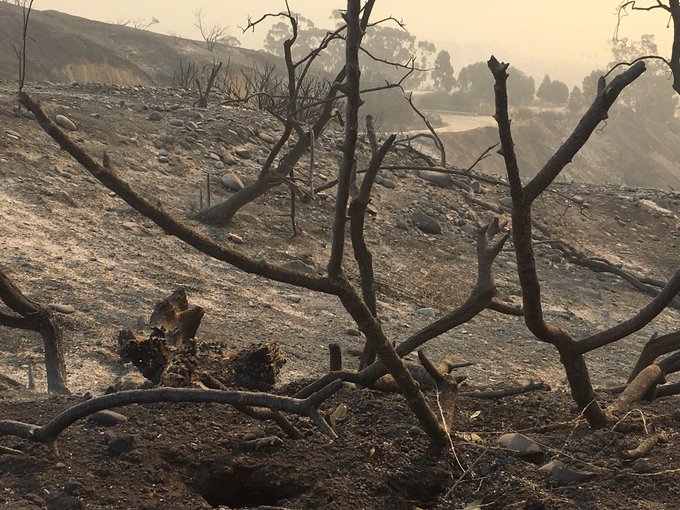 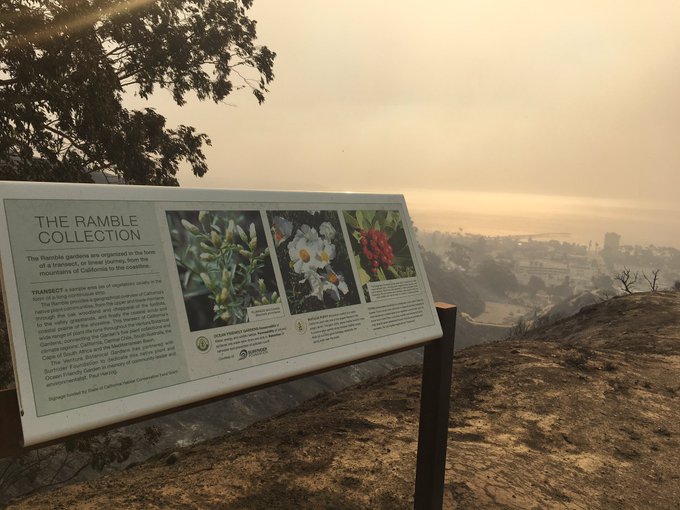 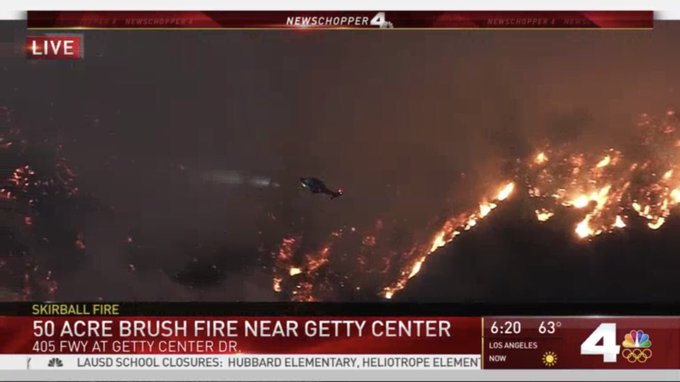 BREAKING: Another brushfire! This is near the Getty Center. NB 405 closed at Bel Air Crest. #SkirballFire#NBCLA 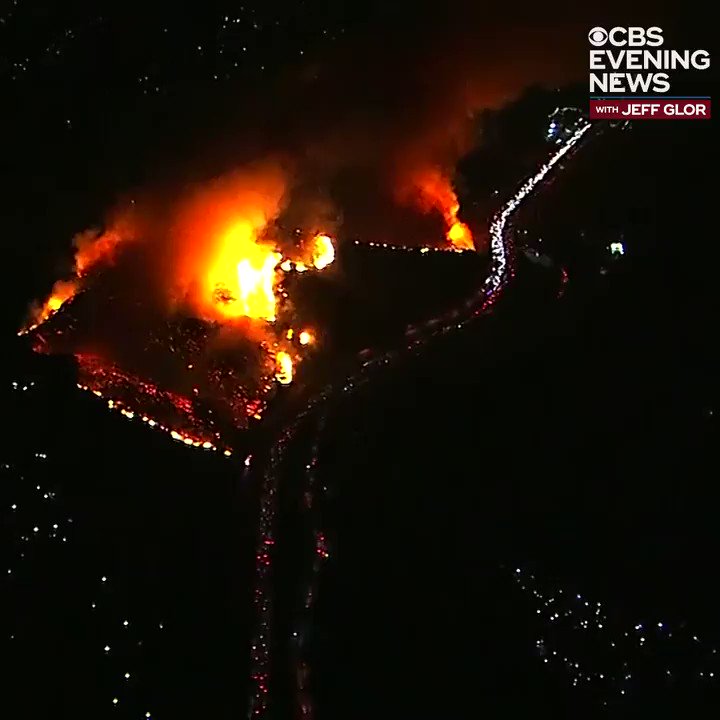 CA WILDFIRES – WHAT WE KNOW#ThomasFire

– There are currently approximately 100 Sheriff’s Office personnel, as well as law enforcement officers on scene 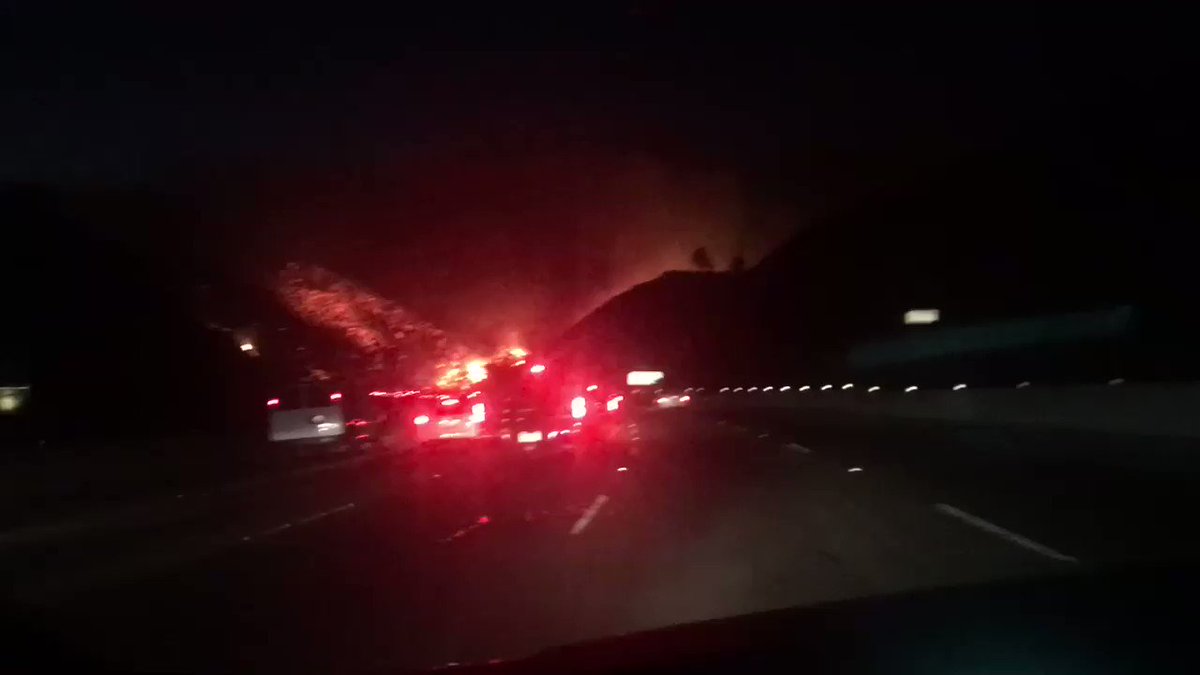 Driving through the valley of the shadow of death this morning, also known as the Sepulveda pass of the 405 where wildfires are raging. #abc7eyewitness#wildfires#SkirballFire 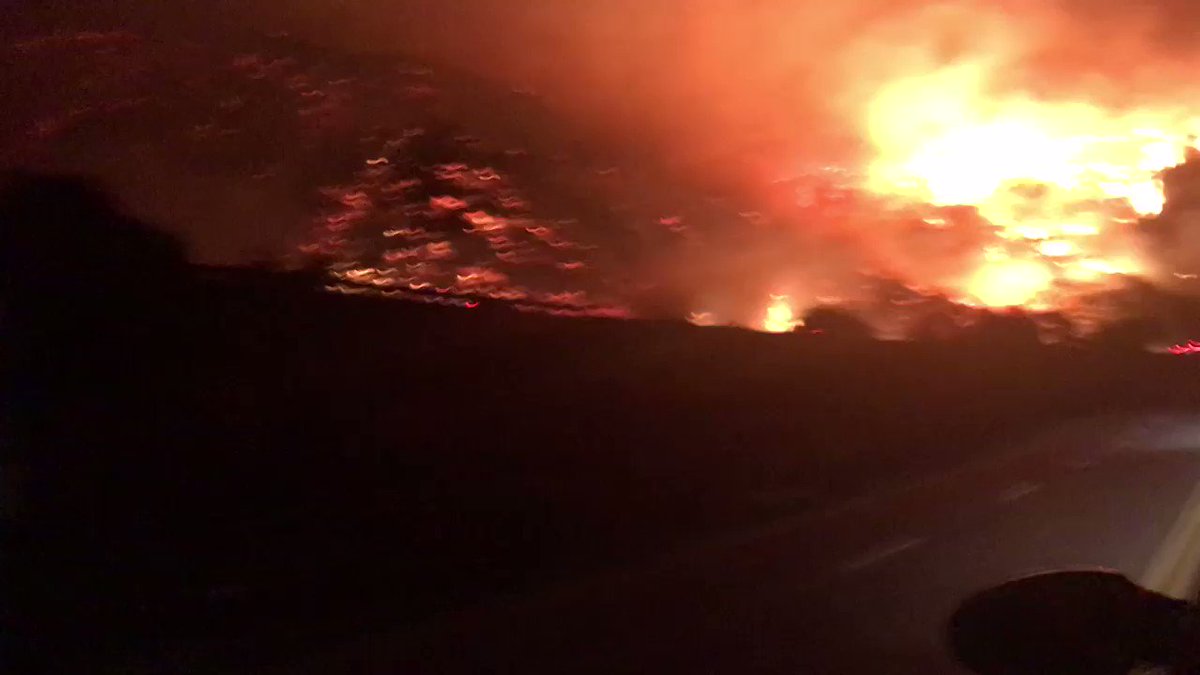 The Sepulveda Pass/405 this morning around 5:30am en route to the airport. Never seen anything like it. Be safe, LA. #LAfire#SkirballFire#CreekFire

Driving to LAX just as they’re closing the 405 for this roaring hillside fire near the Getty exit. Car windows are hot. Stay safe, LA. pic.twitter.com/gclO6A6WB9 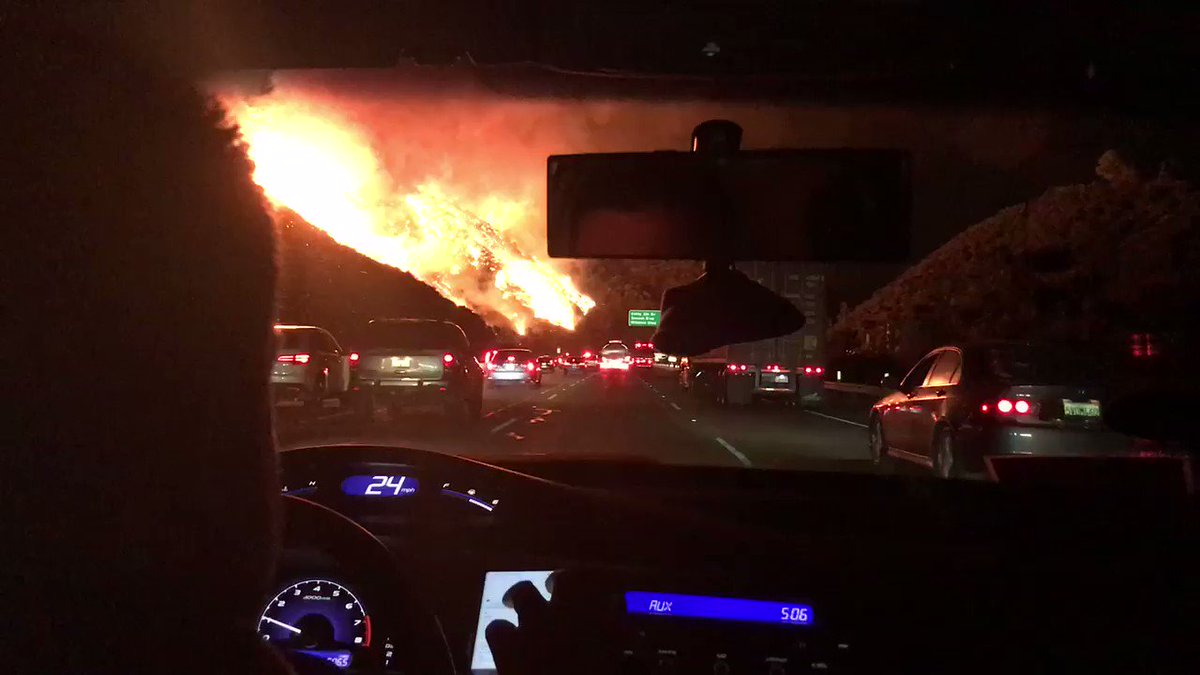 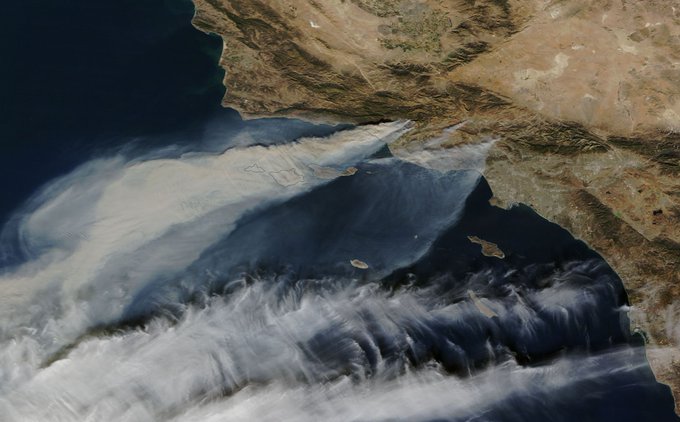 Rarely have I seen a smoke plume that huge and thick on Terra imagery. #CaliforniaWildfires 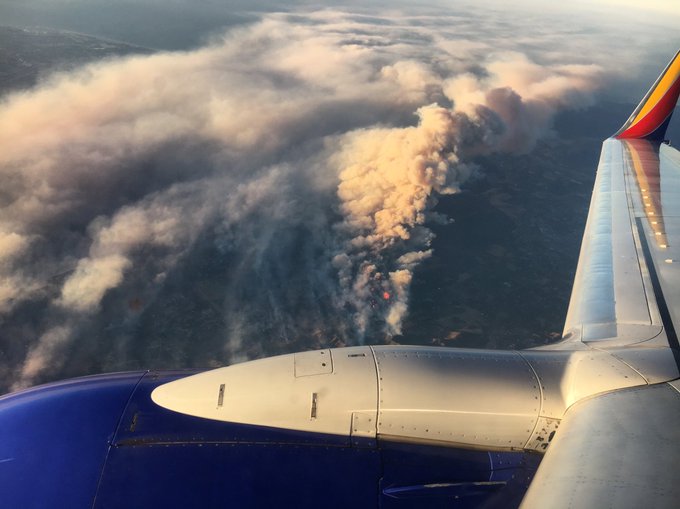 #ThomasFire as seen from my @SouthwestAir flight this morning. #VenturaFire#CaliforniaWildfires

Crews battling a massive wildfire that has caused tens of thousands of Ventura County residents to flee are bracing themselves for a day of heavy winds on Thursday, when forecasters predict fire-stoking gusts of up to 80 mph.

The Thomas fire already has scorched at least 65,500 acres and carved a path of destruction that stretches more than 10 miles from Santa Paula to the Pacific Ocean.

The focus Wednesday, officials said, was keeping the fire out of the Ojai Valley while assessing the devastation in the cities of Ventura and Santa Paula.

The hot Santa Ana winds that drove the fire at remarkable speed on Tuesday had lessened greatly Wednesday. However, they were predicted to increase again on Thursday.

“We are in the beginning of a protracted wind event,” said state fire chief Ken Pimlott.

“There will be no ability to fight fire in these kinds of winds,” Pimlott said. “At the end of the day, we need everyone in the public to listen and pay attention. This is not ‘watch the news and go about your day.’ This is pay attention minute-by-minute … keep your head on a swivel.”

Among those residents who took Pimlott’s words to heart were Kristy Cantrall, who left a garden hose poised on the roof of her Santa Paula townhome, just in case.

Only a day earlier, the Thomas fire was a half-mile away from her cul-de-sac neighborhood on Vela Court, prompting neighbors to climb up to their roofs and spray their homes with water.

Helicopters hovered overhead, dropping buckets of fire retardant on eucalyptus trees that had caught fire just north of the neighborhood.

Cantrall’s son Colin drove from Simi Valley to water down his mother’s home Tuesday night. “Once we saw copters come down, we knew we had to water,” he said.

He planned to do the same Wednesday if the fire flared up. Meanwhile, they just kept an eye on the news.

State fire officials say about 12,000 homes remain threatened by flames, while 50,000 people have been forced to flee. Gov. Jerry Brown declared a state of emergency, as approximately 1,100 personnel continued to battle the blaze. At least one firefighter has been injured.

Fire officials said that the area they’ve dubbed “branch one,” which includes Ojai, the bucolic mountain town known as a haven for spiritual seekers, health enthusiasts and celebrities, is one of their priorities. Firefighters are putting together a plan to protect Ojai and have expressed concern that winds could push the flames toward the city.

“The fire is here and wrapped around the community,” said Shane Lauderdale, a Cal Fire branch director, as he huddled with other officials in a downtown parking lot.

With a map of the Ojai Valley spread over the hood of a crew vehicle and ashes falling around him, Lauderdale said that more equipment and firefighters are being rushed to areas south and east of the town.

“We’re taking advantage of the current calm to concentrate resources along a defensive line,” he said.

Firefighters are moving heavy equipment to meet the blaze on the edge of town, while hand crews are cutting fire breaks.

The fire threat is considered dire until Friday, when punishing Santa Ana winds are predicted to abate. However, Ojai city manager Steve McClary said, “Until we have fog drifting in from the west and light rain, we won’t feel like this thing is behind us.”

Officials said the southeast area of the Thomas fire was one of their highest priorities because of the “tremendous volume of fire” in that area.

They reiterated a message spread this morning — to put out even small bushes on fire along roads and extinguish the smallest embers on the way to bigger blazes because “that’s how it’s spreading from house to house.”

The fire was the worst of several major blazes across Southern California, including one in Bel-Air that closed the 405 Freeway on Wednesday, one in the Angeles National Forest near Sylmar and another in the Santa Clarita Valley.

At least 150 structures — including one large apartment complex and the VistaDel MarHospital, a psychiatric facility — were consumed by flames. But Cal Fire suspects the true number is hundreds more; firefighters just haven’t been able to get into some areas to know for sure.

Geoff Marcus walked past the charred remains of his Dodge Ram in the driveway of his Ventura home and surveyed the rubble that was left behind.

The raging Thomas fire chewed through the five-bedroom house he grew up in and his family has owned for 60 years.

He spent the morning rummaging through the ashes with his two sons, Steven and Daniel. Together, they were able to scrounge a few ceramic plates and mugs. 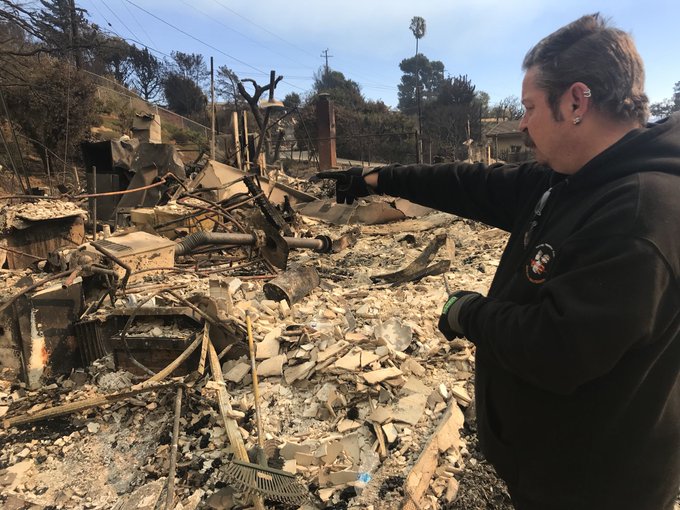 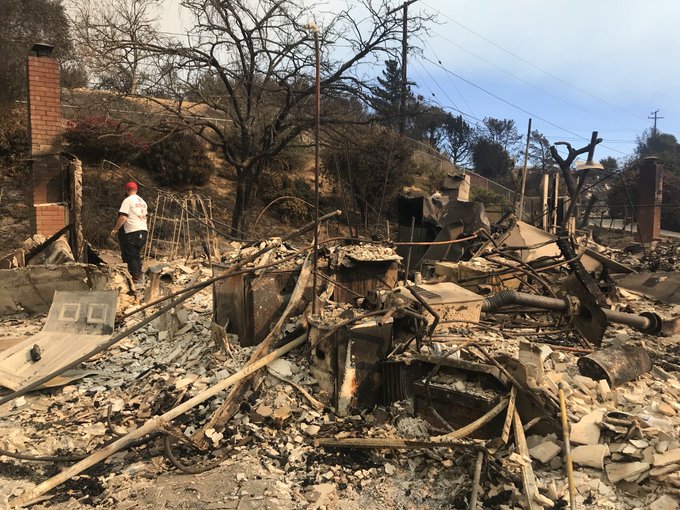 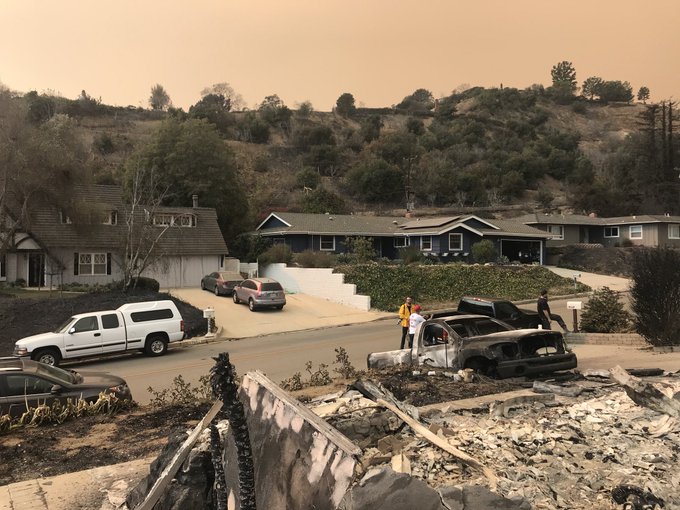 Geoff Marcus’ home burned down in the #ThomasFire. He and his sons are searching through the rubble salvage anything they can.

Marcus said he and his mother evacuated Monday and had no more than 10 minutes to leave. He saw the flames — “an orange glow like the earth was angry” — and knew it was time to evacuate.

“It was enough time to grab the family and that was it. That was all I had,” he said.

Both his neighbors’ homes also burned, along with one house across from his and the homes along a nearby ridge. On Wednesday, smoke rose from the ground, which was still radiating heat.

“I feel loss but my family is safe, and, well, that’s all I care about. These are all possessions that can be replaced,” he said, walking through piles of burned wood and appliances.

Behind him, a blackened shower stood perfectly intact.

“This was a happy place where we celebrated Thanksgiving and Christmas. Everything my mom has collected and cherished is gone,” he said.

As his sons looked through the property, Marcus searched for one particular artifact — a portion of the driveway where he and his father had carved their names in 1984.

“I was hoping to find some jewelry, but it all melted,” he said.

The home was renovated in 2008, he said. Marcus and his mother are staying at his nephew’s house nearby until his insurance company provides him with temporary housing.

“I kept hoping we’d come back and there would be a house,” he said. “Now we rebuild and start over. There’s not much you can do otherwise.”

His son Steven popped his head up where the fireplace once stood.

He waved a small “Precious Moments” figurine with a halo atop its head, then tossed it to his brother with a laugh. 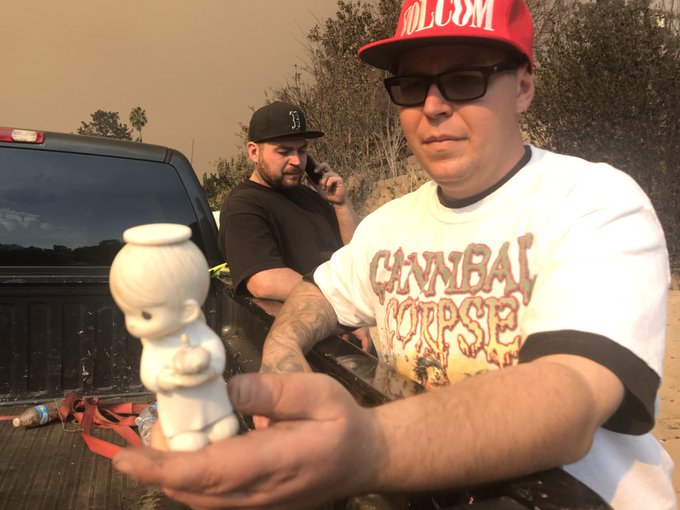 They found an assortment of ceramics, including an angel figurine and a plate that read “Little things mean a lot” from Mother’s Day 1982.

At a briefing Wednesday morning, Rich Thompson, a meteorologist with the National Weather Service, told crews that Santa Ana winds would pick up again on Thursday.

Officials noted that “the wind has overwhelmed everything. … It’s driven the fire across all kinds of terrain.”

“You hear the winds are going to be slacking a little, but keep in mind by slacking we mean gusts of 80 go down to 35,” said Cal Fire Battalion Chief Tim Chavez. “If you notice the air gets still and quiet for a little while, stay there.”

Crews were warned of firefighter deaths that occurred in this area in the past during “a similar situation to today, a weakening Santa Ana.”

Ventura County Fire Capt. Steve Kaufmann said 50,000 residents had been evacuated from their homes and many don’t know the fate of their properties.

“A lot of those folks haven’t seen the state of their homes since they left, and we do have a number of homes destroyed,” he said. “I plead with you, please do not post any pictures of destroyed homes or structures. We don’t want to be the one who shows them their home is destroyed for the first time.”

He added: “The folks here don’t differentiate based on the patch on your shoulder. Please go out and do good work on behalf of our citizens.”

The fire hopscotched through Ventura on Tuesday, burning hillside homes, reaching into subdivisions and also consuming a hospital and a large apartment building. The fire swept through blocks, taking some homes and sparing others.

The blaze started about 6:25 p.m. Monday in the foothills near Thomas Aquinas College in Santa Paula, a popular hiking destination. It grew wildly to more than 15 square miles in the hours that followed — consuming vegetation that hasn’t burned in decades, Ventura County Fire Sgt. Eric Buschow said.

Another critical look at what may be causing the fires

D.E.W. YOU SEE WHAT I SEE?: HELL IS Literally BREAKING LOOSE in California: the SOUTHERN CALIFORNIA INFERNO in Vivid Video and Photographs

On the HIGHWAY TO HELL: Exploring the PIZZAGATE / PEDOGATE / PEDOWOOD Connection to the GETTY CENTER (Article and Video Compendium)