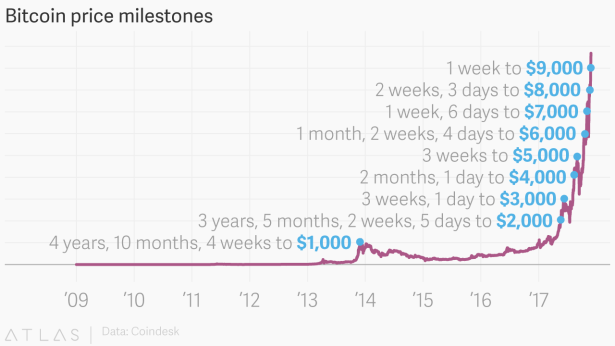 We all remember how the Tulip Market went: 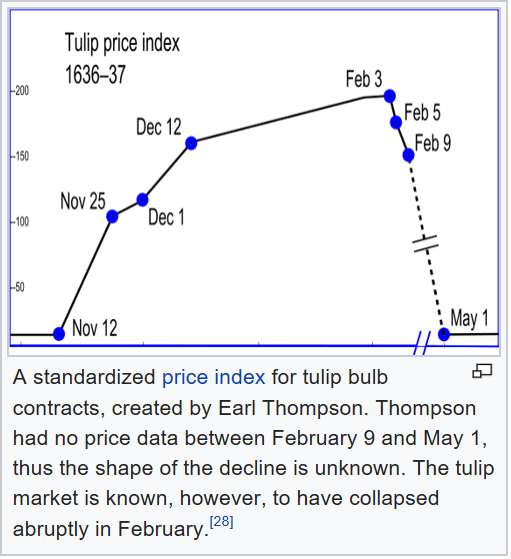 The virtual currency has powered past $11,000 for the first time, capping a jaw-dropping rally of more than 1,000% since the start of the year.

Long shunned by regular investors as a murky domain for cranks and criminals, bitcoin (XBT) has gained growing mainstream acceptance this year, helping propel its value higher and higher.

It’s been smashing through milestones at an increasing rate: it soared above $8,000 just over two weeks ago and only passed $9,000 for the first time over the weekend. By Wednesday morning in New York, it was trading as high as $11,200.

Its stratospheric rise this year has prompted warnings of a bubble. But experts say that the gains in recent weeks have been driven by the expectation that more major investors — like hedge funds and asset managers — are gearing up to start investing in the digital currency.

Next month, investors should be able to start trading bitcoin futures via the Chicago Mercantile Exchange, which is expected to give the virtual currency more legitimacy among professional investors. Futures allow traders to bet on the future price of assets like currencies, metals and agricultural commodities.

Bitcoin is one of many cryptocurrencies that have proliferated in recent years. Unlike the dollar or the pound, these virtual “coins” aren’t tied to a central bank. Instead, they are “mined” by computers using complex algorithms.

The decentralized nature of bitcoin is what appeals to many of its enthusiasts and unnerves a lot of its skeptics.

It also makes it harder to settle arguments about whether the currency’s huge gains this year amount to a bubble. Unlike stocks, its value isn’t based on earnings or dividend payouts, and unlike bonds it doesn’t pay investors a steady stream of income.

And the global market for bitcoin, at nearly $190 billion, is still relatively small. The S&P 500 stock index, for example, is worth more than $20 trillion.

“What is the fundamental value of bitcoin? No one knows the answer to this question,” said Arthur Hayes, CEO of Hong Kong’s Bitmex, a bitcoin derivatives exchange.

Experts said previously that the $10,000 mark would be a key milestone for the digital currency. Hayes and other industry insiders are predicting that the publicity surrounding bitcoin will continue to lure big investors and push prices even higher.

“Institutional investors … will begin to pull the trigger in 2018,” he said.

Related: Can anything stop bitcoin?

The virtual currency has famously attracted the derision of JPMorgan Chase (JPM) CEO Jamie Dimon, who called it a “fraud” that would “eventually blow up.” Warren Buffett has also expressed skepticism, warning of a “real bubble.”

But other leading figures in finance have defended it. Goldman Sachs (GS) CEO Lloyd Blankfein pointed out last month that “folks also were skeptical when paper money displaced gold.”

In September, it plunged as much as 20% after the Chinese government cracked down on offerings in the digital currency, prompting bitcoin exchanges to close their doors.

Earlier this month, it plummeted by up to 30% within the space of a few days, before quickly bouncing back, after it appeared traders were switching to rival cryptocurrencies.

Bitcoin Flash-Crashes To $8,500, Then Rebounds As Biggest US Exchange Breaks

While a notable pump and dump, this drop is a mere 13% (following an 8% drop overnight after initially breaking $10,000).

The crash is continuing with Bitcoin now collapsing below $9000…

Ethereum and Litecoin are also under pressure.

While a notable pump and dump, this drop is a mere 13% (following an 8% drop overnight after initially breaking $10,000).

Remember on November 8th to 10th, Bitcoin crashed 30% amid rumors of its death.

And as we noted previously, Bitcoin crashes at least once every quarter…

Amid a record day for traffic, Coinbase website is down once again…